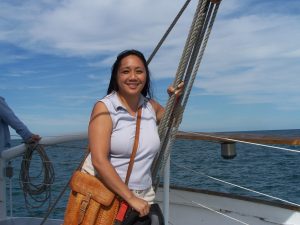 Mary Grace lives and writes at the intersection of nature, culture, and spirituality.  She has written professionally for television and children’s education in such venues as CBS, Pearson Education Asia, and Schlessinger and for conservation magazines such as Sierra and Chicago Wilderness. Her award-winning fiction, essays, and poetry have appeared in Growing Up Filipino II, Our Own Voice, and various anthologies. Mary Grace is a member of the international N.V.M. and Narita Gonzalez Writers Group, has served on the board of the Oak Park Arts District and was a network rep for the Society of Children’s Book Writers and Illustrators.

In 2017, she founded Banyan, an Asian American Writers Collective whose mission is to promote the visibility of Asian American Writers in Chicagoland and to uplift community spirit through the arts. She has an MA in cultural anthropology from UC Berkeley and an MFA in fiction at Southern New Hampshire University, specializing in environmental writing as their Orion scholar. Mary Grace was also awarded the Lynn Safford Memorial Prize. She paddles rivers and lakes, leads woodland clean-ups, stewards her native prairie garden, and lives in a ramshackle, eco-friendly house with her spouse, and two fluffy dogs.

For Mary Grace writing is a spiritual practice, grounded in her Filipino heritage and gratitude to Mother Earth.

Narrator and editor. “Hula as Community: The Cultural and Spiritual Significance of Hawaiian Hula” with Kumu June Tanoue and Halau i ka Pono. Unity Temple. June 2019.

“Story is Medicine”. Keynote for Unity Temple’s “Women’s Connections Retreat” whose theme was “The Power of Story”. February 2018.

“The Shroud of Tremaine, Or a Lady’s Confession”. Commissioned narration for the Edgar Allen Poe Halloween Show at Historic Pleasant Home. Fall 2017.

“The Balak of Hawk and Kaliso”. Lyons and Typers event. The Uptown Writers Space. 2009.

A novel. A sixteenth-century woman shaman and her sisterhood defy Ferdinand Magellan’s invasion of the Philippines.