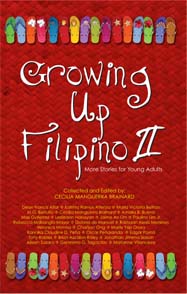 I was 10 when someone gave me my first diary. It was small, hard-backed, had a teddy bear on it and, most importantly, a lock. What more could a kid want than a space where she could say anything she wanted? Crushes, rants, dreams, magic, love songs. It was all in there. What my first diary meant to me can be summed up in one delicious word: FREEDOM! I was hooked on recording the details of my life, the soaring search for the right word, playing with poems and stories from that moment onward.

I was one of those kids who loved her English teachers and was wide-eyed with wonder (and a little intimidated!) at these wise-owl women we called librarians. In L.A., in the 1980’s, there really weren’t too many stories with Filipino or Filipino American kids on the bookshelves. In third or fourth grade, I had an assignment to write a report on my heritage. When I went to the public library, the librarian wasn’t able to find any books that mentioned Filipino culture. She shook her head sympathetically. The invisibility of my culture in books  sank into my consciousness quietly, stealthily. Because I never saw an author of my heritage, I’d assumed that people like me didn’t have any worthwhile stories. Hey, if my beloved English teachers and the wise librarians didn’t have stories of families like mine on the shelves, the stories couldn’t possibly exist, right? Kid logic.

So I wrote, secretly. I was a writer before I even had a word for it. No one in my family and no one we knew wrote stories. The grown-ups in my family were all nurses and navy men, vendors at  sari-sari stores, and med techs who worked long hours and relaxed by watching TV and movies and feasting at potlucks. No books for pleasure, only text books for saving patients’ lives. I thought I was weird for writing my stories and kept my weirdness private. But, man, the joy of locking my bedroom door, curling up on my window-seat with flowery cushions, turning on the radio, and letting my black felt-tip pen glide in loops and swoops across the page!

The first time I ever met a Filipino writer, I was already 19, studying at UCLA, and firmly convinced we had no stories. It was one of the most awesome moments of my life to learn, at last, that someone from my background was an author. His existence showed me that dreams are possible (and that, perhaps, I wasn’t so weird after all). The writer happened to be N.V.M. Gonzalez, who is considered a national treasure and one of the founders of literature in the Philippines. He was also a keen teacher who respected his young students greatly. N.V.M. didn’t make a big deal about himself. Humble, like the characters in his short stories.

So it’s with the greatest pleasure that I share with you all the U.S. launch of the anthology Growing Up Filipino II, edited by Cecilia Manguerra Brainard. Cecilia is tireless in publishing stories from the Filipino diaspora — a fancy word that simply means my sea-faring, adventurous, and  hard-working community has traveled and settled around the world. It’s filled with 27 stories from writers of Filipino descent who grew up in the Philippines, the United States, and Canada. There are wonderful writers like Marianne Villanueva, Paulino Lim, Jr., and Cecilia Brainard. One of my own YA short stories, “Shiny Black Boots,” is included in Growing Up Filipino II. And I count myself lucky to be in such fantastic literary company.

I think the me who was the L.A. Valley Girl in the 1980’s would have loved to see Growing Up Filipino II on the bookshelves. I wouldn’t have had to wait so long to learn that we, too, had stories worth reading. And to my friends who, also, never knew that Filipino stories existed, this is a great time to introduce them to your teens. As a kid I loved Scott O’Dell’s Island of the Blue Dolphins and Elizabeth George Speare’s The Witch of Blackbird Pond. Stories of survival and resourcefulness, creating bonds of friendship, and taking care of your family are universal.   James Baldwin said it best in his 1984 Paris Review interview: “Your self and your people are indistinguishable from each other, really, in spite of the quarrels you may have, and your people are all people.”

Even though it is winter, even though January has a rep for being bleak and stark in Chicago, there’s still beauty to be experienced. Go out and grab you some organic PEACE!

I wrote this Sunday morning at Thatcher. Communing in nature has become one of my spiritual practices :

Silence in the glen
Winter stillness
The rare peep of an unseen bird
Clumps of snow drip
from bare gray branches,
soft thuds onto the ground.
Blue glitter,
a million prisms of light
bless the banks, decay of logs
the ground sculpted into rounds and slopes
by hours of wind and river tongue lashings.
The DesPlaines has frozen —
Time in hibernation,
Spring arrested and Summer’s bubbly frolic
soothed into a cold lullaby
beneath blankets of fleecy white powder.
Delicious hush, how healing you are!

I want to show my son
the land the way it really is,
naked beauty, precious pale sunlight,
the deep sacred silences
no hand-made temple or church can surpass —
this is the open sky, the vault of heaven
the original cathedral.
Too many cars drive past,
one every minute,
speeding to brunches or Sunday services,
rushing on the frozen crunch of road.
But I don’t mind —
more silence for me,
unashamed of my greed,
drinking beauty like a dying woman
as the feathered tips of treetops
brush the morning chill.

Hint of egret wingspan flapping
behind the tangled jumble
of gray winter branches.

I hate the rush of days,
man-made hours,
boxes I am trapped inside.
I push against the walls
only to break through
to another box.
Schedules, deadlines,
start times, end times,
school bells, radio alarms,
buzzers, timers, beepers,
cell phones, online bids —
Enough!

Where is the deep time?
The sun moving westward in the sky?
Shadows of trees growing longer?
The moment suspended,
like a dust mote hanging in sunlight,
the slow growing of grass seedlings?
The halted flow of river
beneath the ice?

Where is the joy
of climbing snow heaps
falling, rolling, tumbling
until the laughter and ice streak
your face and there is nothing left
but the pleasure of returning
inside to a hot mug of cocoa
and damp socks drying on the radiator?

I rail against the boxes
we have made
and claw the pages of every schedule
and run, a free woman, to the frozen Palos hills
where time is kept in drips and ice crystals
forming in the winter sun.